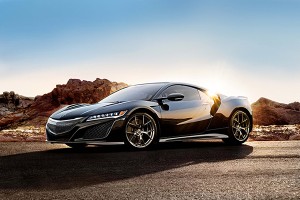 The 2017 Acura NSX boasts the cutting-edge features and under-the-hood performance that Orland Park, Tinley Park, and Naperville drivers demand. As a top-tier luxury vehicle at the head of its segment, it’s no surprise that the new NSX earned rave reviews on its recent appearance on Jay Leno’s web series about his favorite vehicles, Jay Leno’s Garage. Read on to learn what he had to say, then stop by Joe Rizza Acura to learn how and when you can get behind the wheel of this jaw-dropping super car.

To get the inside scoop on the latest NSX model, Leno teams up with Acura’s lead designer, Michelle Christensen, and Acura’s global development chief engineer, Ted Klaus. They key him into the nuances of the design process of what Leno calls “the first real exotic car that you could use anywhere for any reason,” such as its new longitudinal engine and restructured chassis. Leno was largely impressed by how the 2017 NSX innovates its design for improved drag and airflow while still retaining features like the rear haunches and sculpted fascia that set the signature supercar apart. While driving it, Jay mentions that he’s very impressed by the NSX’s model-unique engine, as well as its smooth manual shifting and immersive power. “All right,” Leno chuckles at the end of the ride, “I gotta get one of these.”

Under the hood, the 2017 Acura NSX sports a twin-turbocharged DOHC 24-valve V6 engine capable of a whopping 573 hp and 406 lb.-ft. of peak torque. Despite its considerable performance power, the 2017 NSX still yields an EPA-estimated 20 mpg* city and 22 mpg* highway of fuel economy. Inside, it offers a standard multi-view camera, Bluetooth and USB connectivity, and the leather and aluminum interior trimming you expect in a sports car of its caliber. Add in a full suite of advanced safety technology, and you have a luxury coupe that not only does it all, but does it all in style.

Check out the 2017 Acura NSX Near Orland Park, Tinley Park, and Naperville at Joe Rizza Acura

You’ve heard our take; now see why the 2017 Acura NSX left such a strong impression on Jay Leno’s Garage and how it’s the perfect addition to your Orland Park, Tinley Park, or Naperville commute. Visit Joe Rizza Acura at 8100 West 159th Street in Orland Park six days a week, or contact us at (800) 314-1625 for more information today.

* Based on 2016 EPA mileage ratings. Use for comparison purposes only. Your actual mileage will vary, depending on how you drive and maintain you vehicle, driving conditions, battery pack age/condition (hybrid models only) and other factors.