Acura unveiled a bold, sculpted, curvaceous new concept car at the 2016 Detroit Auto Show. The slightly space-age-looking Acura Precision Concept is essentially a blueprint for what will be Acura’s new design language, meaning elements of this concept will be showing up in real-life, on-the-road Acura models in the not-too-distant future.The elements of the Acura Precision Concept will serve as a model for all of Acura’s future vehicles, centered around the company’s “Precision Performance DNA.” 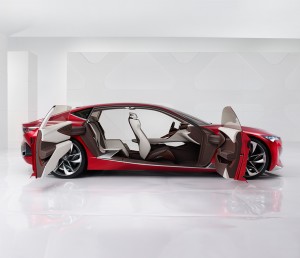 The Precision Concept offers long and low architecture that is reminiscent of cars like the BMW 6 Gran Coupe and the Mercedes-Benz CLS, also invoking the essence of a four-door coupe. Acura has created the Precision Concept with a focus on high-contrast details and blending modern, sheer surfaces with muscular, organic lines.

The new Diamond Pentagon grille debuts in this model, and the Precision Concept also features Jewel Constellation LED headlights and floating LED taillights in the rear.

Some elements, like the rear suicide doors and ultra-thin floating rear seats, are less likely to survive from concept to production. But it’s quite likely consumers will see various other features hit the road in new Acura models, like the “floating” center-mounted touchpad that was on display in the concept car.

Acura designed the Precision Concept around a theme it calls “quantum continuum,” endeavoring to smoothly blend the interior and exterior of the car in a seamless way.

The Future of Acura 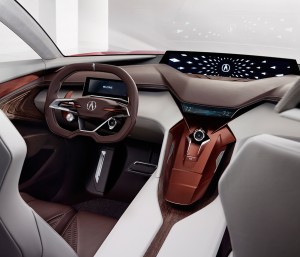 Acura gave birth to the Precision Concept as part of its efforts to blaze new trails in terms of future design – in particular for its sedan models.

Watch for Precision Elements to Come Your Way Soon

Be among the first consumers in your area to test drive new Acura models featuring Precision Concept elements at Rizza Acura. Visit or contact us to test out currently available, high-quality Acura models and stay in touch about Precision Concept-inspired vehicles as they come down the pipe.